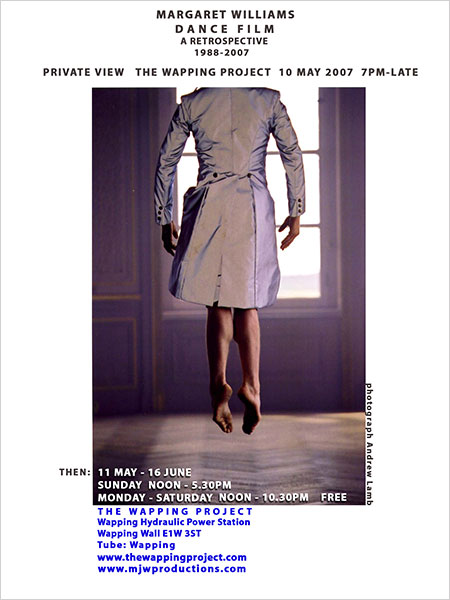 The British film-maker Margaret Williams has been making dance films for almost 20 years, and the range of her work on show in this multi-screen retrospective reveals her to be a remarkable talent. Remarkable, too, is the way Jules Wright, director of the Wapping Project, has displayed almost 24 hours of Williams’s total dance output, spreading her films over five screens in this converted old power station in East London.

Setting up this installation must have been a nightmare of technology, with films shot in a variety of formats all having to be transferred onto DVD. Most of the films were made for television – BBC and Channel 4. This is the first time most of them have been on the big screen.

The exhibition (1988-2007) affords all kinds of pleasures and an open-ended time frame. Spend 15 minutes enjoying one film (admission is free), or become wrapped up in hours of mix-and-match viewing. What’s so clever is the way, in the great hall downstairs, two of the screens are set up to act as an inspired double act. While Lea Anderson’s fresh and humorous early 1990s compositions are filling the big screen, Cathy Marston’s emotionally wrought Before the Tempest, from 2004, is providing a stark and delicious contrast. The latter, viewed on a small screen seen through an archway below, plays tricks with perspective that fool you into believing that what you see is either live or 3-D.

Williams’s witty, dynamic style captures dance in ways that give it a new spin, transcending the limitations of the stage while staying true to its essence. The choreography she shows us represents a huge range, from Kenneth MacMillan’s Romeo and Juliet to the cutting edge of Wayne McGregor and the flamenco hyperbole of JoaquÍn Cortés.

My favourite? That has to be Men (1997). As choreographed by Victoria Marks and filmed by Williams in Canada using a cast of elderly men, it’s one of the most compassionate films I’ve seen. This moving 20-minute tribute to the dignity of old age and the playfulness of the human spirit is the perfect meeting place of cinema and choreography. But then that could be said of many of the films in this must-see show. 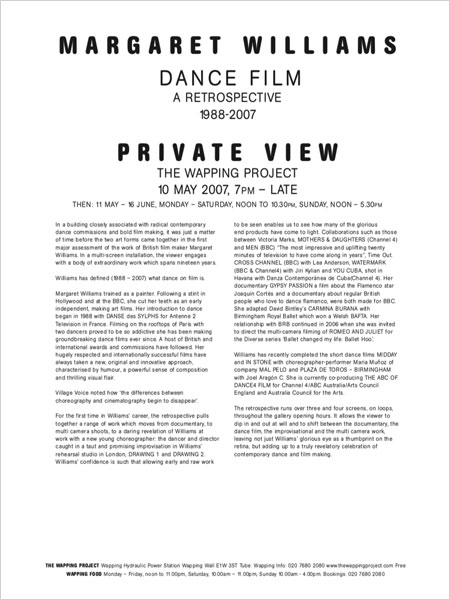 View the PDF of the Retrospective

Dance on TV has always come with inbuilt limitations. There’s not just the small size of the screen, but also the sense that there is something too predetermined, too second-hand about the experience. I love the way that a new installation at the Wapping Project has compensated for some of these issues. A retrospective dedicated to director Margaret Williams, it is spread across seven screens: some big, some small, some in the restaurant area of the converted power station, and some down in the marvellously spooky brick basement.

Running simultaneously are films made throughout Williams’ career as a film director, taking in her collaborations with the Cholmondeleys and Featherstonehaughs and going up to her recent filming of Birmingham Royal Ballet’s youth project, Ballet Hoo.

Williams has always had a strange and lovely eye for dance. She finds great locations to put the material in, and she has a talent for making shifts in light, shadow, space and even the weather interact with the choreography. This Wapping installation manages to offer some of the life and unpredictability of a flesh and blood performance. Down in the basement, you can see the balcony scene from Romeo and Juliet framed by a brick arch that creates its own qualities of mystery and romance. Elsewhere, there’s the vast, crystalline snowy landscape of Victoria Marks’ piece Men; meanwhile, tucked away in a corner, you’ll find a dark flamenco scene starring Joaquin Cortes.

You can stay for a few minutes or for an entire film. Upstairs, where there are more screens, is the added drama of a huge dining area, which is open for lunch, dinner and tea. I tasted the best risotto of my life watching Williams on Candoco and Danza Contemporanea de Cuba. It put a classy new spin on the TV dinner.